Everyone at one point or another has considered flipping houses. Since the boom in home flipping in the mid-90s, hundreds of thousands of people have wondered if they could do it, too. Even Dan Connor on the hit sitcom Roseanne flipped a house! Granted, he nearly got royally screwed by his investor, but he still managed to sell the house!
OK, he sold it to his spazzy sister-in-law, but still!
So, just what makes for the perfect house flip? Here’s some insider information to whet your appetite. What you do with it after this is totally up to you!

Run-down urban neighborhoods, specifically those that border or snuggle up to upper-class areas, are prime locations for flip-able houses. Shabby houses that border affluent neighborhoods have greater baseline value, even before improvements, than their similar houses located farther away from the richy-rich. One way to identify areas or individual homes that have potential for flipping is signs of major repair. Aged roofs, overgrown lawns, and heavy wear on exterior siding are all good signs for the savvy flipper.

As the demand for in-town living increases (baby-boomers downsizing, millennials wanting accessibility to work and local events), proximity to public transportation is going to become even more hot. Because of this upward trend, multi-family real estate and commercial properties will also see increases in their respective markets. Basically, a trickle-up effect is sure to happen if things keep heading the way they are.

For savvy flippers in this environmentally-conscious time, green certifications and energy-efficient components are a bonus to homebuyers and renters. Taking the time and effort to install Energy Star lighting fixtures or appliances will pay great dividends when the open house rolls around. 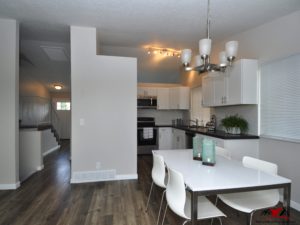 Back in September, analysts at the personal finance website WalletHub compared 300 Texas cities on 21 key points to determine which cities real estate markets were most “attractive”. Frisco ranked top on the list! Close behind the winner were close neighbors, McKinney (#2) and Allen (#3), and Richardson came in a strong Fifth. Carrollton was in there, too, at #8.
For comparison, last year, this same analysis showed that Austin was ranked at #5. This year, the capital city took a dive down to 68th place. For shame….
How’s that for civic pride? Okay, real estate market pride, but it’s still pride! Spread the good word, friends! We’re on top, and we’re going to stay there! Contact us with any question you may have!